Listen: A Campaign Against Addiction

Viacom was seeking a partner to develop Listen, a pro-social campaign to fight drug addiction that was to be launched in tandem with an upcoming Surgeon General’s report, Facing Addiction in America. Our task: build a campaign up to the task of addressing addiction that would meet the high bar of past Viacom public service campaigns – complete with messaging, content and campaign collateral.

Working in collaboration with the team from Viacom’s creative agency, Velocity, we would need to establish a disciplined workflow that allowed for collaborative concepting and design review that could then be executed, reviewed, and approved for a cross-channel Viacom and Ad Council supported campaign.

The campaign would need to both live up to the creative standards set by Viacom on its channels ranging from MTV and Nickelodeon to Spike, and campaigns from Choose or Lose to Get Schooled, while carrying meaningful and engaging pro-social messaging focused on fighting addiction. Based on Viacom audience research and outreach to campaign partners, we would need to synthesize multiple stakeholder POVs into the campaign, with a unifying Listen message that could work for all.

Found Object would become the social impact agency partner that would complement the Viacom Velocity team, and together we would deliver the Listen campaign – on point for the Viacom brand and true to the impact space we know.

Building on our experience running veterans initiatives for Viacom network, Spike, we were able to sit down with the various team members and the internal client – Viacom CSR – to quickly establish roles and approach.

We also collaborated with the team producing the cross channel TV special Listen: Facing Addiction in America to ensure cohesive branding and messaging.

With Velocity, we set a content strategy that mixed documentary and scripted approaches, then divvied up responsibilities for content creation. It was decided that Found Object would assume responsibility for the documentary narratives and the Listen microsite, while we would  collaborate with Velocity on messaging and overall design.

Throughout, we liaised with the Viacom CSR client directly, to ensure that Listen campaign elements – microsite, messaging and content – fit the need to be both creative and substantive.

Initial Viacom research indicated that listening is the first step to addiction recovery. Thus, the concept for Listen: Facing Addiction in America. Beyond listening, we needed to discover the ideal audience: addicts or their supporters.

To hone in on campaign goals, we participated in Viacom focus groups that allowed us to focus the approach to speaking directly to the supporters of addicts with tools for listening and resources for recovery. Building on the concept “it starts with listening,” we researched comparable addiction resources across the globe and spoke with experts at addiction organizations.

During research, we discovered the viral phenomenon of overdose videos, posted to social media to shock audiences and shame the user. On the comment thread for a particular overdose video, we noticed the young woman in the video, Robin, commenting to say she had gotten clean and was ready to help anyone who needed it. We knew we had our No Shame story. With two weeks to launch, we filmed with Robin, capturing a story of resilience and redemption that would represent the message of Listen.

Found Object researched key learnings in the addiction space on “how to listen” and “why listen.” We then designed and built sections of the website that would offer more than just messaging, but also tools to help identify and address addiction. 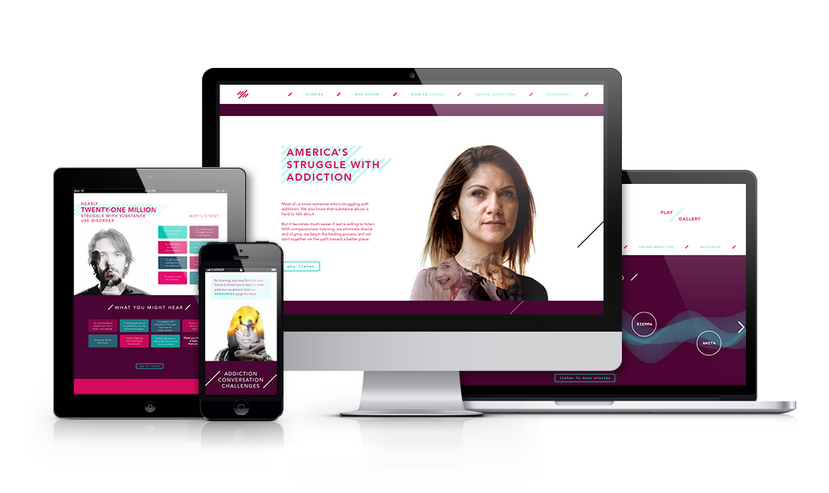 Listen: Facing Addiction in America launched online on 11/17/16, timed to the release of the US Surgeon General’s first-ever nationwide report on addiction.

• A Listen TV special aired simultaneously across 8 Viacom networks, and led to over 2,500 website visitors in the first hour, with remarkable 3 minute average engagement times with Listen content.

• The Listen microsite features stories of redemption and recovery, as well as tools and resources for facing addiction.